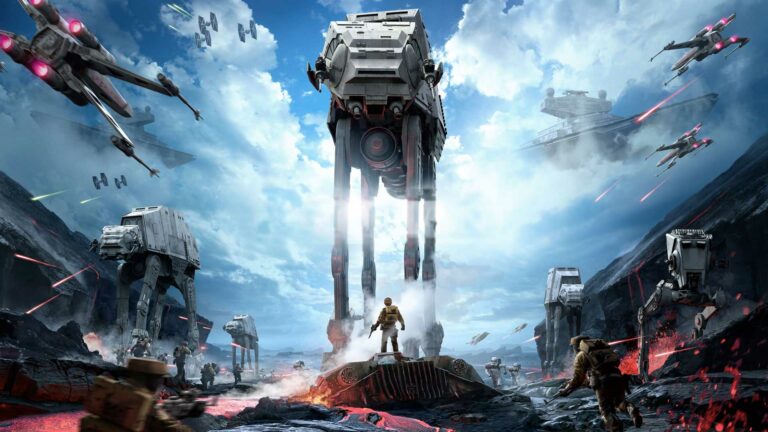 There are lots of Reddit threads and major gaming sites are posting impressions and reviews. I spent 6 hours playing Battlefront over the past few days and wanted to share a few brief impressions.

I left the Battlefront beta this fall and cancelled my pre-order. I found the pvp not enjoyable and spent a lot of time running and dying. This negative impression of the beta is a helpful perspective when I say that I’ve enjoyed my time with the full game via EA Access. While I had fun playing, I was always able to put it down easily. Battlefront, like Star Wars movies, is a popcorn game. You can pick it up, play a few rounds as a snack, and move onto other things.

I’ve tried all the game modes and have played a number of rounds on couch co-op with my sons. As a game to play locally with family or friends, it’s a blast. My family had fun passing the controller around after each match. The wave based Survival grew old quickly, but the human & AI vs. human & AI mode was fun both as heroes and soldiers. I played the training missions both solo and co-op. Wonderful environments, but as others online are saying, they hint at missed opportunities for additional modes. X-wing Fighter cannon/trench runs recall Rouge Squadron. Imperial v. Rebel speeder bike chases through the forests of Endor. These could have been much more than a one and down experience. Like popcorn, they are enjoyable but rarely filling.

The substance, as it is, in Battlefront is in multiplayer. I played a number of rounds of fighter squadron (ranked from lvl 2 to 5 this way) and initially thought this was were I would spend most of my time. But as I explored other modes, I found fun in Cargo (CTF), Droid Run (Domination/Control Point) and Hunt the Heroes. Hunt the Heroes plays out like Evolve where one hero takes on foot soldiers, except whoever kills the hero plays it in the next spawn. In my time, this rotated between players and no one dominated. Droid Run isn’t all that unique in it’s gameplay as it plays like other control point modes, but having to stick around and defend a wandering Gonk Droid is a nice SW tweak. Cargo (CTF) was enjoyable and people are still learning the maps. While it’s possible to get skunked fast against an experienced team, my games were a good tug of war back and forth as players sought different routes. These modes are ones that could be easy to pop in and out of on a regular basis.

Some modes, like Blast (TDM) and Heroes v. Villains (TDM w/Characters) are what they are. I know some people will enjoy these modes, but they do little to distinguish themselves from other games. Those players who had fun with the modes from the beta (Drop Zone and Walker Assualt) will continue to enjoy them. I didn’t enjoy them any more than before. They are fine, not always fun, as they can get one sided. The spawning on friend and lack of squads limit both modes. And like all modes could benefit from more maps. Like the overall game, each mode is fun in short bursts, but is often a shallow experience overall. Popcorn is tasty but is it a satisfying meal.

This post turned out longer than I thought, so if you are still reading… thanks. I think there is a lot of fun to be had in Battlefront, but there are a lot of frustrations too. I found myself coming back to it night after night during my trial, but after a few rounds I went back to Halo 5, Battlefield 4, and even Titanfall to fulfill my desire for sci-fi shooters and deeper MP experiences. By the end of the weekend I had tried all the modes and didn’t feel the desire to play my remaining hours on the trial. I booted up other, older Star Wars games in my collection and found enjoyment in those Star Wars games.

As a lifelong Star Wars fan, I found a lot to like, but as a modern game player I was left wanting more. With a fun group of friends, there is a lot of fun to be had in a pick up and play Battlefront experience. But I did not find a deep gameplay experience. DICE built a great engine for the future, but the game is limited at launch. Does that make it worth $60? Not to me, but I had enough fun that I’ll be looking for sales typical on EA games shortly after launch. Battlefront, like popcorn, is a fun snack on a regular basis but it is never a satisfying main dish.

You can join the conversation on this topic here: