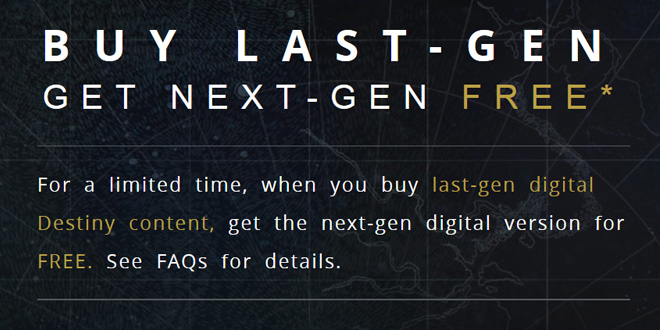 Announced just three days before launching, Activision and Bungie are promoting that anyone who buys Destiny “digitally” on the last gen consoles (PS3 or XBOX 360) will get the next gen digital version free.

It’s a great deal right? But what about all of us who already pre-ordered?

Among those of us who have both last and next gen consoles, I’m sure many if not the majority opted for the next gen version.

However, if we would have known about this promotion earlier, I think many of us would have chosen that “2 for 1” option.

To complicate matters, there is no Digital Guardian Edition available for per-order on the XBOX 360.

So in the end, while this is a great deal for those who were on the fence about getting the game, it’s truly a shame that so many dedicated fans who per-ordered the game already are so publicly being given a raw deal.

IMHO, Bungie should give all Next Gen digital pre-order customers a digital copy of the “last gen” as well.