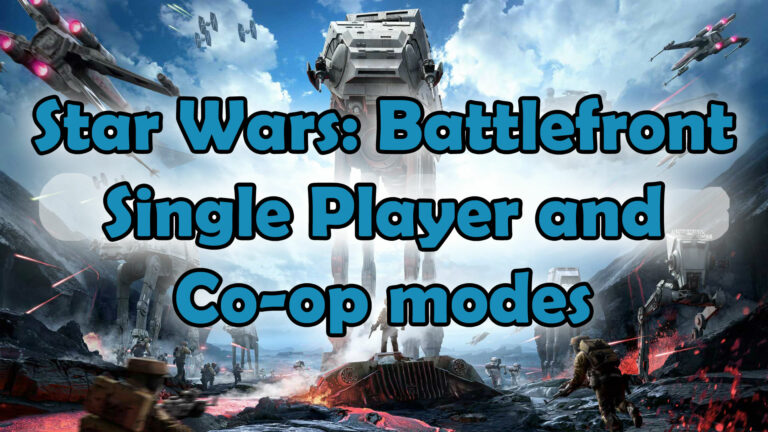 Star Wars Battlefront Single Player and Co-op Modes: What are the options?

Yesterday I searched and search and couldn’t find one place that listed all the single player and co-op modes of the new Star Wars Battlefront game.

So with that in mind I put together the below list from excerpts of several EA articles.

There are five different Training Missions, and also a tutorial called Probe Droids where you’ll learn about blasters, Star Cards, and blowing up Imperial hardware. In the Beggar’s Canyon Training Mission, you’ll soar through the Tatooine skies, bringing down TIE fighters with your X-wing. You’ll master yet another iconic vehicle in the Invasion Snowspeeder mission, set on the icy planet of Hoth.

Hold off waves of Imperial forces including AT-STs, TIE Fighters, elite stormtroopers and more. Survival can be played on all the planets in Star Wars Battlefront including Endor, Hoth, Sullust and Tatooine, and the maps have been specially designed with this Mission type in mind.

Battles and Hero Battles:  SP, Couch and Online 2 player Versus

Battles is classically Rebels versus Imperials, and can be played against a team of AI enemies or against another player.   When playing against another player, it can be 1 vs 1 only, or each player fighting alongside AI enemies against each other.  The choice is yours, and the goal is to collect points by picking up dropped tokens from your defeated enemies. Reach 100 points and the match is yours. Hero Battles follows the same rules, but with the key difference that you’re fighting as the iconic Heroes and Villains in Star Wars Battlefront.

You’re invited to join in on our Battlefront discussion in the CAG forums HERE.